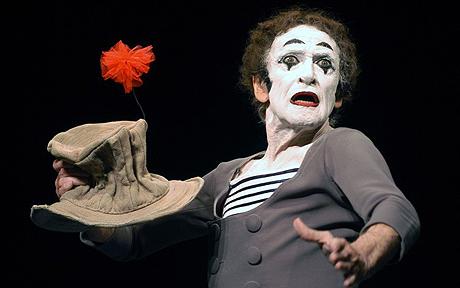 BEST KNOWN FOR: Marcel Marceau was best known for his work as a mime artist in France.

Mime artist. Marcel Mangel was born March 22, 1923, in Strasbourg, NE France. He studied at the Ecole des Beaux-Arts in Paris, and with Etienne Decroux. In 1948 he founded the Compagnie de Mime Marcel Marceau, developing the art of mime, becoming himself the leading exponent. His white-faced character, Bip, based on the 19th-c French Pierrot, a melancholy vagabond, is famous from his appearances on stage and television throughout the world.

Among the many original performances he has devised are the mime-drama Don Juan (1964), and the ballet

This entry was posted on 03/22/2014 by First Night Design in Articles, On This Day, Reblogs and tagged Actor, birthday, French, Marcel Marceau, mime.