Save the Theatre Royal Lincoln 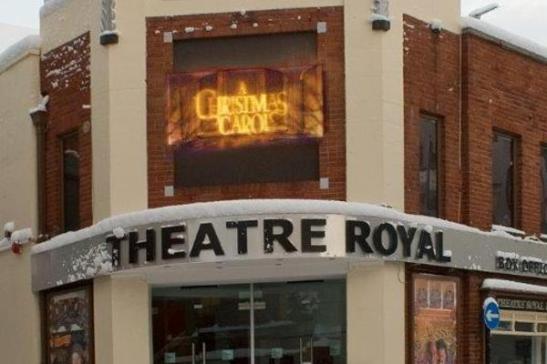 The Theatre Royal Lincoln is one of my favourite regional theatres and where I had my first job in 1978 as an ASM on a touring production of Rattle of a Simple Man by Charles Dyer, directed by Simon Williams and which starred Kate O’Mara, Harry H Corbett and Eden Phillips. I fell in love with Lincoln, its theatre, its Cathedral (lauded by John Betjeman for its Gothic architecture) and much else besides.  I remember a great little sandwich shop round the corner from the theatre that offered the best bacon sarnies on the planet and would rush round there for supplies for me and the rest of the crew! The local council pulled funding and, in 2009, Nicola and Ian Dickens bought the theatre from Chris Moreno.  They have already done some incredible work, as you’ll see below, using their savings. Now they need your help.  It would be a disgrace if this exquisite Victorian theatre were to fade into oblivion.  Sarah Vernon

I have always loved the Theatre with a passion. Lucky really. Here’s why!

We were living quietly in South West London. My husband had been an actor but had set up his own commercial theatre company and become the Producer/Director and I was an actress but after our two lovely children were born, I became a full-time Mum. One day, Ian, my husband came home from work a little sheepish and said “Er, I think I bought a theatre today.” My heart leapt but at the same time I felt a little scared. “Where is it?” was all I could manage. Happily it was a beautiful little theatre that I knew and loved and had worked at. It was in the city of Lincoln in Lincolnshire. Lincoln is home to the Cathedral where they filmed “The Da Vinci Code”, “Harry Potter” and is surrounded by wonderful rural English countryside.

The council were withdrawing funding and if my husband had not stepped in it was going to close and stand empty. We sold our little house in London and used the cash to refurbish and renovate the theatre. We moved up to Lincoln. That was 4 years ago. Now here’s where we need your help…

We have run out of personal funds. We are not subsidised because we took it on ourselves. It is the only theatre in the UK without any funding whatsoever. It is a beautiful Grade II* Listed Victorian theatre with 475 seats. We have refurbished the Box Office, the Entrance, the Bar and Front of House areas. We have re-painted all the Dressing Rooms and WCs. Ian my husband has had a totally new Sound System installed and even a new roof because the rain was coming in. We desperately need funds. Please look at the website http://www.lincolntheatreroyal.com Thank you.

2 comments on “Save the Theatre Royal Lincoln”