My connection is still atrocious hence my not responding to comments. 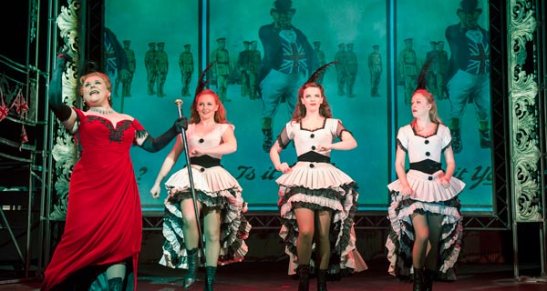 Oh, What A Lovely War
Richmond Theatre, as part of UK tour
12 February 2015

It’s grouse season. Somewhere lush, privileged and privately owned in Scotland at some point during the middle of the First World War. A group of businessmen from around the world have gathered for a jolly. A German, a Frenchman, an American, a Swiss and the English host. The Scottish gamekeeper is on hand to ensure whims are satisfied. They are all arms dealers or bankers. People who made money, lots of money, from the continuing war.

They boast about the merchandise they are shipping around the world, slipping behind or past enemy lines. They talk in awe about the new weapons, the acid-laced grenades, the poison gases they are developing and selling. They laugh about the money they are making and will continue to make and express outrage at the talk of Peace – they want the war to run and run, like a West End musical. The Swiss banker keeps asserting his neutrality. The Scottish man ensures the grouse is released for their shooting pleasure, but is not afraid to remind his master that his six sons are at the Front. But to the shooters, his sons, like all soldiers on all sides, are just the same as the grouse: fodder to be shot for their personal gain.

It’s a powerful, disquieting scene; brutal because of its honesty and matter-of-fact playing. It’s one of several powerful and remarkably performed sequences in Terry Johnson’s revival of Oh What A Lovely War, originally produced by the Theatre Royal Stratford East in commemoration of the 50th anniversary of that company’s original production of the piece.

Oh What A Lovely War is a collaborative piece of musical entertainment; it was created by Joan Littlewood’s ground-breaking Theatre Workshop, Charles Chilton, Gerry Raffles and members of the original company. In its day, it must have been confrontational and astonishing. Its trail-blazing qualities have…