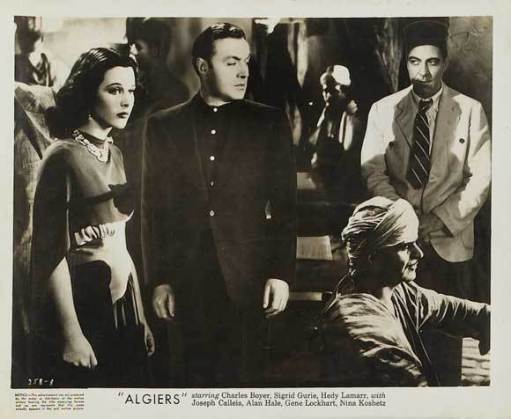 “Come with me to the Casbah” is one of those famous movie lines that was never spoken in a movie.

Boyer never used the immortal “Come weeth me to ze Casbah” pick-up line in the 1937 drama, Algiers. But he did use it in the film’s trailer and, astonishingly, this cheesy line still makes the rounds more than 60 years later.

First, what the heck is a “Casbah”? Generally speaking, a casbah (or Kasbah) is a fortress, and the actual Casbah in Algiers is today a UNESCO World Heritage Site. For our purposes, though, the introduction to the film Algiers describes the Casbah as home to “drifters and outcasts from all parts of the world – and criminals who find this a safe hiding place from the long arm of the law.”

The most intriguing criminal in the Casbah is its de facto ruler, Pepe le Moko (Boyer), a well-dressed man who wears power as comfortably as his tailored suits. Not only is Pepe le Moko the best movie name ever, the character is intriguingly complex – brooding, intelligent, vindictive. Yet he has a…

via Hedy Lamarr Goes to the Casbah | Silver Screenings.

2 comments on “Hedy Lamarr Goes to the Casbah | Silver Screenings”

Dispatches from the Crossroads of Literature and Gastronomy