Liza Sadovy and I were at drama school together in the mid-to-late 1970s and it was evident then that she was a gifted musical actress. This was one of the very first interviews I did for the original Rogues & Vagabonds website. Liza was playing the Queen of Hearts in the Royal Shakespeare Company’s Alice in Wonderland at the Barbican in London, followed by Christmas in Stratford-upon-Avon. 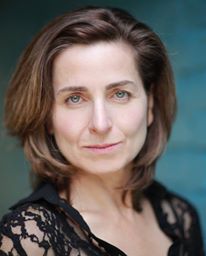 When did you first decide to become an actress?

I don’t remember there being a decision, really. There wasn’t going to be anything else! My grandmother, who was a gifted amateur, was a huge encourager.

Who or what inspired you?

There was a teacher at my secondary school who was also very encouraging but I can’t remember anybody in particular inspiring me. I think it was things like ballet that inspired me. I liked that whole going-on-stage thing and I loved music very much. My mum was always taking me to the theatre and the ballet.

Tell me about Alice in Wonderland.

It’s an adaptation by the northern poet, Adrian Mitchell, who is absolutely brilliant. It’s both books and all the scenes are very much shorter than you’d remember them. It’s just over two hours twenty minutes with interval. I have to say I don’t think I’ve ever seen such a ravishing production of anything in my life. It’s visually out of this world and the costumes are outrageous and fantastic. The performances are incredibly strong, they’re terrific. People who do mostly musicals meet people who do both who meet people who are just actors – you get a nice cross-section of people. And I can’t think of one person I don’t like! It’s a cast of 25, then you’ve got the technicians and the musicians – loads of us. There’s an incredible buzz.

She is absolutely fantastic. She creates a real playroom in rehearsal and she doesn’t jump on you all the time with her ideas: she sees what you’ve got and builds on that. It’s great fun. She’s a wonderful woman, very complimentary and very encouraging. And she’s always laughing. I’ve never heard a director laugh and giggle so much during a tech.

Who has done the music and choreography?

Stephen Warbeck, who won an Oscar for the film Elizabeth, has composed all the mad, crazy music while Terry Davies has done the anthem stuff. And Linda Dobell, the choreographer, is also an actress so she knows exactly how to get across what she wants in the way of movement.

How are you feeling as the first night approaches?

I’m terribly excited by it and very proud of it. I just long to get some feedback from some real punters.

Is there a particular part you’ve always wanted to play?

I’ve only got a few more years left for this but I’m dying to play Sally Bowles. Like you, there was something about Liza Minnelli and Cabaret that thrilled me. I suppose that was our era, wasn’t it, Sarah?

What, if anything, would you like to change about the nature of the profession?

I would change the obsession with girls and boys and hope that they would use more men and women. For instance, The Bill used to have a lot of older actors in it and then all of a sudden they all got booted out or left and it was like Junior Bill: it was insubstantial and unbelievable. I mean, young actors – fabulous – but people of all ages have something very interesting and older people who’ve lived longer are so much more colourful. That’s something I’d like to change in life, not just in acting.

Would you say that in your years as an actress you’ve made a living?

In later years, yes. I was scraping the barrel a bit round the late 80s but it’s been much better since then.

Any advice for aspiring actors?

Don’t do it unless you absolutely H-A-V-E to. And don’t do it if you think you’re going to get rich!

Liza is currently at the Apollo Victoria as Madame Morrible in the musical Wicked. She has a wealth of credits covering the years since this interview, including La Bête in the West End and on Broadway, Annie Get Your Gun, The Good Soul of Szechuan and Six Characters Looking for an Author at the Young Vic, directed by Richard Jones. She has also appeared in Sunday in the Park with George at the Menier Chocolate Factory and Wyndham’s, Oliver at Sheffield, and The Dresser with Nicholas Lyndhurst at the Duke of York’s and on tour. Television includes Extras with Ricky Gervais, Midsommer Murders, Babylon, The Honourable Woman, Doctors, Eastenders and Emma. In addition, she has played in The History Boys, Noises Off, A Separate Reality at The Royal Court and done Richard II with Steven Berkoff. She was awarded Best Supporting Actress at the TMA Awards for performances in The Secret Rapture (Bristol) and Mrs Klein (Northampton) and spent two seasons working with Alan Ayckbourn in Scarborough.

Dispatches from the Crossroads of Culture, Cookery, & Creativity