Originally posted in The Guardian. 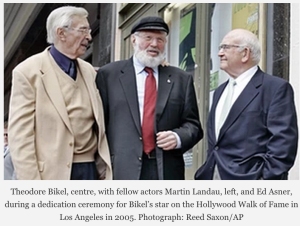 Theodore Bikel, the Tony-nominated actor, folk singer and original Captain von Trapp in The Sound of Music on Broadway, has died in Los Angeles aged 91.

Bikel, for whom Rodgers and Hammerstein wrote the musical’s famous song Edelweiss, died at the UCLA medical centre on Tuesday, his publicist, B Harlan Böll, confirmed.

The actor famously played Tevye in Fiddler on the Roof more times on stage than even Chaim Topol, who starred in the film, and also appeared in dozens of TV shows including The Twilight Zone, Charlie’s Angels, and Star Trek: The Next Generation, as Worf’s father.

Born in Vienna in 1924 and named after the modern Zionist leader Theodor Herzl, Bikel moved with his parents after the Nazi occupation of Austria to British-occupied Palestine, where he began acting in Hebrew theatre in his teens.

via Theodore Bikel, actor, singer and Broadway star, dies at 91 | Stage | The Guardian.