‘I had seen [Henry Irving] in Faust, his blanched face appearing in the unholy light of thirty limes, a long, thin figure in red, heightened by the tall feather in his hat, strutting jauntily, until in the last act he stood with outstretched arm on a huge rock, towering over his attendant witches, a figure of real menace and mystery.’

‘His posters were simple and austere, plain lettering in two colours which were reproduced in the Lyceum programmes equally simple and restrained, with never an advertisement while Irving remained his own manager.’

Romeo and Juliet was at the Lyceum Theatre in 1882 with Irving as Romeo and Ellen Terry as Juliet. 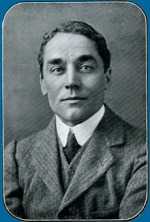 Both of the above quotations are taken from a memoir of Henry Irving [1838-1905] by actor-playwright William Devereux [c 1870-1945], reprinted in the June 2007 edition of First Knight (Vol. Eleven No. One), the journal of The Irving Society, which was formed in 1996 with John Gielgud as its founding patron. The article was discovered in The Mander & Mitchenson Collection, now part of the University of Bristol.

Updated 18-09-15: An annual subscription for membership of the The Irving Society, which includes the bi-annual publication of First Knight, costs only £25 for a single individual, £40 for a couple and £30 for an overseas subscription. It is also possible to subscribe to First Knight only at £17 (overseas £22).