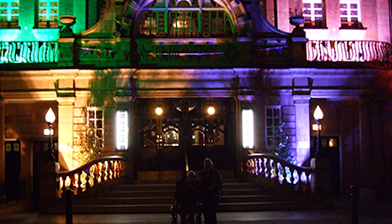 Dion Boucicault supposedly wrote London Assurance – his debut play – when he was only 20 years old. The original manuscript took a mere 30 days, and he later admitted to doubts about the quality of the finished product. These doubts were well founded. Despite flashes of wit, it’s a highly derivative work that draws as much from Much Ado About Nothing as it does from Sheridan’s early work. Described as a kind of practice run for The Importance of Being Earnest, it has nothing of that play’s charm or finesse.

The lack of charm isn’t helped by Nikolai Foster’s clunky direction, and the decision to camp-up the lead roles. Gerard Murphy is particularly grating as Sir Harcourt Courtly, a preening, self-deluding fop around whom the farce revolves. Grace Harkaway (Clare Corbett) is the savvy beauty doomed to marry him, and Charles Courtly – son of Harcourt – is her love interest. Harkaway’s servant Pert (Vivien Reid) sports a dodgy Scottish accent, while Nigel Hastings gives a one-dimensional performance as conniving lawyer Mark Meddle.

All the comedy staples are here, from mistaken identity to double-crossing and a near-disastrous wedding, but with so little attention paid to the script’s subtleties, there’s a seen-it-all-before feel. The fact that it’s structurally messy brings about more problems. The narrative doesn’t kick in for forty minutes, by which time things have near ground to a halt.

Relief arrives in the form of Geraldine McNulty, who makes her first appearance shortly before the interval. She plays Lady Gay Spanker, a sharp-tongued country gentlewoman who quickly whips the men into shape. Spanker’s mismatched husband is similarly entertaining, a jockey (Spanker is obsessed with hunting) whose meekness is matched only by his wife’s outspokenness. Christopher Ryan – best known for his role in The Young Ones – is great fun, and the second act is all the more watchable for it.

Philip Whitcomb’s set is reminiscent of a child’s music box, lending the play a childhood resonance. The tinkling music adds to the overall sense of playfulness, as if the characters themselves are at the mercy of some oversized child (which in a way, they are). Of course, Harcourt eventually grows up, and is able to sacrifice beautiful Harkaway – forty years his junior – to his son, whom she happily marries. The action picks up from the second half, and the finale is nearly – if not quite – satisfying.

Overall, it’s a mixed bag. While the play’s overriding liberalism is refreshing (Harkaway is blessed with a Beatrice-like pragmatism) it’s an ill-paced, untidy affair. This, coupled with the casting errors – neither Hastings nor Murphy is right for his part – means that sections of the play fall flat. Foster favours a slapstick approach, and the play’s finer nuances are overlooked. A lighter, more sophisticated touch would better draw out the play’s themes; it would also give the minor characters more of an opportunity to shine. However, for McNulty alone it’s almost worth it, if only as a reminder of how good this play could be.