A delightful exhibition of early 19th century toy theatres, scenery and characters opened last week at London’s Guildhall Library. It is devoted to the sheets published by Hodgson & Co from his shop in Newgate Street and his successor Orlando Hodgson. Hodgson was not the first to issue toy theatre sheets but launched himself into the trade in 1821 in direct competition to William West, the original theatrical print publisher established in 1811, and revolutionised the trade by turning the notion of fragmentary ‘souvenir sheets’ into complete, performable plays with a full complement of characters, scenes and specially adapted scripts.

To many people these black and white or brightly coloured engravings were amusements for children to cut out and play with but, both then and now, there have been many adult enthusiasts – as shown by the packed houses for some recent performances given by Young Blood and Friends – but these popular prints are also a valuable source of theatre history. Closely modelled on actual productions, they are a rare record of the scenery, costuming and histrionic manner of performance of the London stage. For the earliest known examples in 1811 they provide a unique record of almost every popular melodrama, pantomime and theatrical spectacle of the age.

The Guildhall display, curated by Horatio Blood and Peter Ross, with the invaluable assistance of David Powell and Barry Clarke, sets out to emphasise the fact that Hodgson’s prints really do represent the British stage in miniature. The exhibition includes both printed sheets of characters and scenes, original playbills for the productions concerned and actual model theatres, including some facsimiles that have been provided so that visitors can try their hand at performance on them. 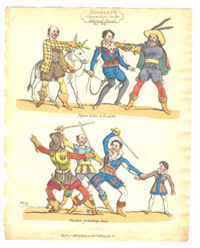 Thanks to the generosity of private collectors, the Museum of London, the British Museum and Guildford Museum, the exhibition includes a wealth of visual material, most of which has never been displayed before. Watercolours by Robert Cruikshank, whose flamboyant exuberance was highly influential on toy theatre art, printed prosceniums of London theatres, and a tinsel picture of Mr Farley as Grindoff, the arch-villain of the explosive melodrama The Miller and his Men, capture the excitement and enchantment of this still neglected period of theatrical history. Star billing goes to the oldest known surviving toy theatre dating from the early nineteenth century, kindly lent by Guildford Museum, which is displayed with a unique contemporary cut-out production of The Elephant of Siam as performed at the Adelphi Theatre in 1829.

As film critic and historian – and an expert on toy theatre – David Robinson said at the opening of the exhibition, “The people who issued the toy theatre prints were not just printers: they were impresarios – and impresarios who presented not just the legitimate repertoire of the patent houses but the whole range of London’s popular theatre.

Dispatches from the Crossroads of Culture, Language, & Educational Technology