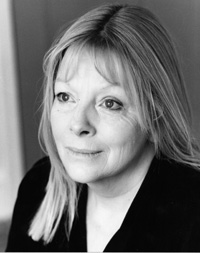 Anna Calder-Marshall knows she has it all. Not because she loves playing Miss Prism in The Importance of Being Earnest under Erica Whyman’s direction at Oxford Playhouse — though she does; not because she is delighted to enjoy a happy marriage to actor David Burke that has lasted for more than thirty years, and produced a son, Tom — though she is. Nor is it because she adores life in Kent where the family have lived for some years since leaving London. No. Anna Calder-Marshall knows she has it all because there was a time when she might have lost all these things through breast cancer.

Certainly the impact of the cancer was devastating, but she has found the positive aspects to be incalculable: an experience like that gives a whole new complexion to life, pinpointing in absolute terms what is truly important. “I learnt an awful lot,” she says. “It’s not the end and life does go on. I get quite angry with people who just say, ‘Oh, it’s the end’, and it isn’t.”

Ethereally beautiful still, Anna Calder-Marshall was born in Kensington, London, to the writer, biographer, novelist and essayist Arthur Calder-Marshall [1908 – 1992] and his wife. She herself was far too fascinated by acting to follow in her father’s footsteps and went on to train at LAMDA. One of her earlier successes was as Cathy Earnshaw in the 1970 film version of Wuthering Heights opposite Timothy Dalton’s Heathcliff. Nowadays, she is relishing the older, character parts, such as Prism. She spoke to me during rehearsals.

“I’d been asked to play Miss Prism before, I think about three times, but it’s always seemed to be either Tom was young and it was at Chichester or it was away. And I’ve always loved her. I had to play her at drama school — I’m not sure it was the whole play — but because I was the youngest in my year, they gave me all the character parts so I was always playing the Nurse in Romeo and Juliet, rather than Juliet, or funny old spinsters, so I feel I’ve come full circle now I’m getting all these parts I played at drama school!

But this time it was in Oxford, and my father was at Oxford and David was at Oxford, and I came here, I think to do an Inspector Morse, and I just thought: four weeks and it’s for Erica Whyman who’s a wonderful director, and I did Birthday Party with her in Sheffield and had a ball. It opened a lovely door to different kinds of work and I’d go anywhere to work with her, I really would.

What really fascinates me about Miss Prism is the absent-mindedness of somebody who puts a baby in a bag. I’ve actually started writing a diary of her, about the years that she didn’t turn up and what’s happened after because I’m fascinated by what it must have done to her in her head. I think she must be wonderfully absent-minded. I mean, it must be like an illness. That’s my starting-off point.

We [the company] are just very happy with each other and I don’t think it could be bettered, really. Maggie Steed is glorious as Lady Bracknell. And Sally Phillips, who plays Gwendolen, I’ve worked with. We did a trial sit-com together; she asked me to play her mum. And the boys, Dominic Rowan as Algernon and Guy Lankester as Jack, are wonderful, and the young girl Amanda Hale is a girl I saw at RADA and just thought: who is that young girl, she’s utterly brilliant? So we feel very happy.

Erica gives you such extraordinary freedom and trusts you to really use your intuition and your imagination. But she’s highly intelligent and she has a wonderful view of this play and you feel a very firm hand just guiding you. I literally would work anywhere with her because I think that highly of her.

My father sometimes said to me, ‘Annie, why don’t you write?’ And I think I was a bit scathing and I said, ‘But the wonderful thing about acting is that you have your memory and you just dive back in there. If you write something, it gets spoilt because you write about an incident and then it becomes about your brain taking that on rather than your memory. But I always wanted to act and they were very — I mean, I was very lucky to have them as parents because they were so rich in literature and music and artistic things. We used to read plays at home or dance together or whatever. They were wonderful. They were different than other parents and I hope I’ve done the same for our son too. He’s 24 and he’s a young actor and his name is Tom Burke and he’s wonderful, he’s quite extraordinary.

I’m very glad to have got back into character parts because I don’t think they quite knew what to do with me and, admittedly, I had Tom, and I had cancer, and I just worked on real life rather than theatre. And theatre seemed to give me up a bit or I gave the theatre up — I don’t know which way round, and I’m very happy to be back in it.

I was concentrating on bringing up Tom. I got odd jobs which were very nice and I was quite content to work once a year or something. Then my Mum and Dad got very ill and I gave up time looking after them, occasionally wanting a little flutter but nothing happened. And probably the business didn’t know where to put me anyway, do you know what I mean? But I don’t regret one minute of not working because I’ve found other things in my life and I think real life is as important when it’s such a crazy job, and relationships. I’ve still got a good marriage. We were married in ’71 and David’s doing a play at the Donmar, Mary Stuart, which has had rave reviews [transfers to the Apollo on 7 October].

I tell you something I just did at the Gate which I really loved doing. I just did Tejas Verdes by Fermín Cabal, about the experiences of Chilean women during Pinochet’s rule, and we didn’t have any seats — the audience just came and walked into this wood and it was quite extraordinary doing it. It was thrilling, it was something so different. And I did that for Thea Sharrock; Erica used to run the Gate before. Apparently we played it very differently to the first company [A C-M replaced Gemma Jones for the play’s second run this year] but I loved it and, well, it was a privilege to do, to bring awareness to people.

And a man who was Chilean came to see it, who’d been in one of those detention centres, had been tortured. And all of this is described in Tejas Verdes. He couldn’t speak properly because his tongue had been electrocuted. And he hugged me afterwards and he just said how important it was that this had been done. I had to describe this graveyard and he said it was just as it was and that we should continue.

But it was strange because sometimes people were fainting. They all said, ‘It’s all right, Annie, nobody faints during the gravedigger [scene]. And promptly, on the second night, somebody did! And it’s weird to be talking to somebody and then the next minute moment they’re at your feet. I thought, what on earth do I do? Do I continue, and is what I’m saying worse? As I get on, will she faint again? And she was another actress and she came round and she said, ‘Do go on.’ I couldn’t remember what I was going to say! I was so preoccupied with whether what I was going to say was worse or not. But I love doing new stuff in a different way, and to be stretched like that is wonderful.

I paint a lot. I’ve had three exhibitions. I can’t quite believe that! I had to do another play up in Sheffield with a fantastic young director, Jonathan Mumby, who just asked me to do a picture for him as a commission and from that my sister Clare, who runs an art gallery — The Crooked House Gallery [no longer extant] — said, ‘Annie, we could be selling your work.’ I couldn’t believe I was actually selling them because I usually just give them away. To sell them felt better than joining the National! I can paint till the cows come home, I can paint till I’m 99!”