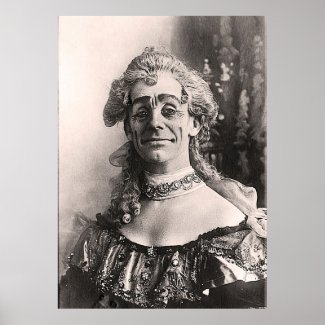 Excerpt from an interview with the actor, director and playwright, Stewart Permutt.

[One project] on the go is a play about the Music Hall legend Dan Leno for the actor Jonathan Kydd. Leno was the forerunner of them all and has been the inspiration for so many comedians and actors in the last hundred years. The first draft of the play is nearly completed. ‘It’s quite complex because I didn’t want to do a conventional biog play about Dan Leno — “and then I appeared here and then I got married and then I did this and then I did that” because I think that’s boring. And does anybody care about that? What they care about is him and his work, how he died.’

He goes on to tell me that he has taken one or two liberties with Leno’s life. ‘I’ve made up things and instances that didn’t happen but could have happened. And I say it’s “inspired” by the life of Dan Leno. Eighty percent is the truth and twenty percent of it isn’t. And I know there are aficionados and people who might not like that but it’s given me leeway.’

He has spent time listening to the few available recordings of Dan Leno at the British Museum. ‘I’ve used quite a bit of his [stand-up] material which is terribly funny if you hear recordings of it but if you just see it written out, it doesn’t look funny.’

Leno was famous for his pantomime appearances alongside Herbert Campbell at Drury Lane under the management of Augustus Harris but it is this material, Stewart says, that does not work for a modern audience at all. ‘So I’ve written my version of what I think it could be like. I’ve sort of cheated it and rewritten it so it’s more acceptable for an audience, still with the flavour, a Victorian feel.’

Only Leno’s stand-up routines remain sacrosanct. ‘Otherwise,’ says Stewart, ‘the audience won’t know what he was like. And that is word for word with every dot and comma what he did. And that has to be, I said to Jonathan, absolutely accurate otherwise you can’t say you’re being Dan Leno.’

Leno’s contemporary, the actor-manager Herbert Beerbohm-Tree, once said to one of his leading ladies, Constance Collier, that if Dan Leno played Richard III, he would be the greatest Richard ever. Stewart has taken this as his basic premise. ‘I said, well, let’s pretend he did. He wasn’t gay, he wasn’t camp, he wasn’t Danny La Rue,’ he adds, stressing that Leno played his women, his dames, ‘absolutely for real’. ‘He didn’t put on a silly voice or anything like that. He just played them terribly truthfully and if you hear recordings of him, it sounds like a little lady.’